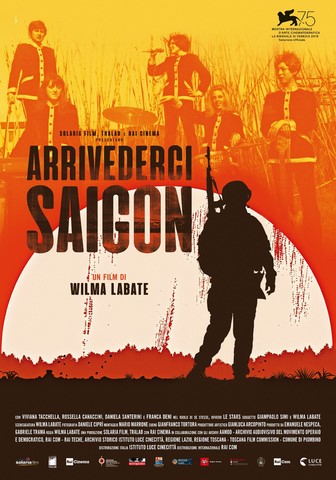 Looking back at Vietnam and the incredible misadventure of an all-female music band during the infuriating war.
"Arrivederci Saigon", a film documentary directed by Wilma Labate which will be presented to the press & industry on September 4th 2018 at the 75th Venice Film Festival, in the Official Selection in the new non-competitive Sconfini section, is the incredible story of  “Le Stars”, the young Italian band that from the Tuscan province is sent unexpectedly to Vietnam, to perform in the American military bases.
We are in '68 and every dream seems possible for these five talented girls aiming for international success. They are little more than teenagers with the desire to succeed and leave the industrial province where they live, so different from the famous Chianti hills: they come from the Piombino steelworks, from the port of Livorno and from the Piaggio factories of Pontedera. It is the red province of the houses of the people and of the Italian Communist Party, travelling out of that province is their goal. The band receives an offer from the tour manager which they cannot turn down: a series of concerts in the Far East, Manila, Hong Kong, Singapore and more. So, armed with their musical instruments and their incredible talent, the girls set out on the road to success but ultimately ending up in the middle of The Vietnam War.
Contrary to what was planned and after their first show in Manila, “Le Stars” were immediately diverted to Saigon for a few concert dates but in reality they would not have left the war zone until the end of January 1969. Between makeshift accommodations, meals summary and transfers to be dealt with by the escort of a military organization that would need to protect them from the firing of the North Vietnamese rockets or the targeting of the Vietcong guerrilla light artillery.

Fifty years have passed since these young girls were forced to grow up drastically and prematurely. Viviana Tacchella, Rossella Canaccini, Daniela Santerini and Franca Deni are now finally ready to narrate the three months of survival in American military bases hidden in the jungle, between American soldiers and soul music that would impact and compromise their entire existence.