Italy, a man wakes up in a hotel room. He has a wound in the head and a gun under the pillow, but no recollection of his identity or past life. Soon he realizes he is in danger, chased by someone who wants to kill him.
Yuki is a Japanese young illustrator of manga’ books who decides to go to Italy, looking for inspiration to draw her new graphic novel.
In Italy Yuki meets the man with no memory, Marcello, who works as frame maker now. Yuki starts to draw the novel, induced by a young man met by chance, using as lead protagonists the faces of Marcello and a woman, wife of a gangster boss.
In the meantime between Marcello and Yuki a tender complicity is borning: they decide to leave together by car searching for a misterious place shown in a picture, the only one past element own by the man.
At the end of their trip the events of the novel they reveal to be part of the true past of the main characters, without Yuki knowing it.

The new movie by Rolando Colla, a Coproduction Switzerland / Italy, Peacock film and Solaria Film, supported by MiBACT DG Cinema, ready to release after the selection at the Zurich Film Festival - competition.

“Destierro” is the title of a documentary in which Jorge Arriagada, a musician, and Carmengloria Morales, a painter, both from Chile, discuss  music and painting.
Carmengloria arrived in Italy in the fifties and never went back to Chile, living an intense and full life that turned into a secluded and discreet living.
Something strange happened, and Carmengloria vanished without a trace.
To understand what happened to the artist, Maura asks her friend Manuela Manuela to help her unravel the documentary by reconstructing Carmengloria’s whereabouts and - ultimately - her story.
Together, Maura and Manuela embark on a journey around the life and art of Carmengloria: a life dedicated to art.
Supported by Ibermedia Programme, MIBACT and CNCA Chile. 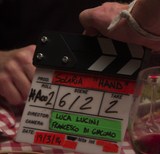